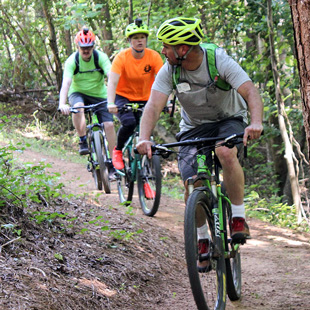 Overmountain Victory National Historic Trail at Lake Whelchel is a 7.5 mile loop around the lake. Also part of the Carolina Thread Trail, families are welcome to hike, bike, and bring a pet. Trail is very easy and well groomed. No roots, rocks, or big hills. The Lake Whelchel Trail celebrates the historical significance of Cherokee County in the Southern Campaign of the American Revolution. The Overmountain Men’s victory at Kings Mountain resulted in what Thomas Jefferson referred to as the “turning of the tide of success” in the American Revolution. In 1980, 200 years after the Battle of Kings Mountain, Congress designated the OVNHT the first national historic trail east of the Mississippi River. It is the only national historic trail in South Carolina. "It is very exciting to see additional Overmountain Victory Trail built along the corridor. It is especially exciting in Cherokee County, an area that is ripe for recreation opportunity and very dialed in on its Revolutionary War history and heritage,” said Ben Richardson with the National Park Service.